These days more people than ever are cutting back on the amount of animal products they eat, or moving entirely to a more plant-based diet. This is usually either for health reasons, to be kinder to the environment, or both.

The effects of dairy can vary greatly from person to person. But, dairy is the top source of saturated fat in the western diet – and studies suggest that it could be linked to heart disease, type 2 diabetes, Alzheimer’s disease, and an increased risk of cancer. A new medical review by Harvard University also concluded that eating too much dairy can harm both our bodies and the planet.

Though, if you’re used to eating dairy, then omitting it or even reducing it from your diet can seem challenging – particularly if you’re a keen cook or baker. But, the good news is that there are lots of simple swaps you can make to ensure your culinary creations remain dairy-free.

So without further ado, here are some of the best dairy-free substitutes for milk, butter, cheese, yoghurt, and cream. 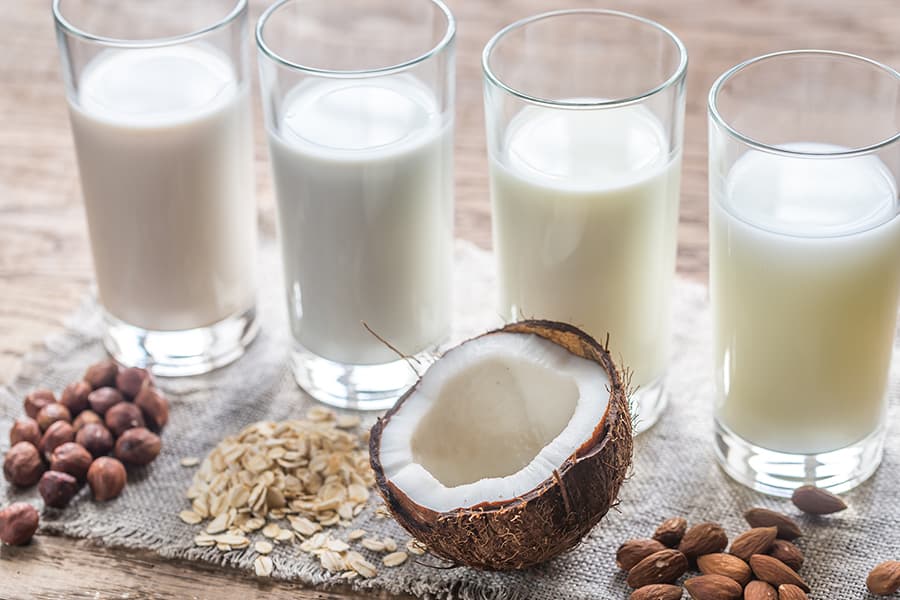 The rise of milk alternatives has been impossible to ignore, and these days one in three Brits drinks plant-based milk instead of cow’s milk. This means that when it comes to finding a replacement you’ll be spoiled for choice. Oat, almond or soya milk are the most popular plant milks in this country, but you can also buy rice, coconut, cashew, hemp, and hazelnut milk.

Whether you use milk in a bechamel sauce or to make a batter for baking, it’s a crucial ingredient in the kitchen, and luckily you can just swap out dairy milk with non-dairy milk. But different types of plant milk are best suited for different uses, and finding the right one can be important – plus trying out different kinds to find your favourite can be quite enjoyable.

Because they’re thick, oat milk and soya milk are generally the best for cooking and baking. Soya milk is high in protein and calcium, but low in fat and has no cholesterol – and its creamy texture and flavour make it a great alternative to cow’s milk. Alpro soya milk is sold in most shops.

Oat milk also has a mild, neutral flavour, and it froths up like no other plant milk, which is why it’s a staple in coffee shops. Oatly Barista is the thickest, creamiest variety of oat milk that’s sold in all supermarkets.

Almond milk doesn’t contain as much protein as soya or oat milk, but it’s rich in vitamin E, and also works well in recipes. However, due to its subtle nutty flavour, it’s usually more suited for sweet recipes, and is ideal for smoothies and desserts. Making your own almond milk is super quick and easy, so if you’re interested in giving it a go, check out this recipe by Minimalist Baker.

Do bear in mind that brands can differ greatly in flavour and texture, so if you tried one oat milk and didn’t like it, then this doesn’t necessarily mean you won’t like any of them. Just be sure to give the carton a good shake before pouring!

To see how you can make your own almond milk, have a watch of the video below. 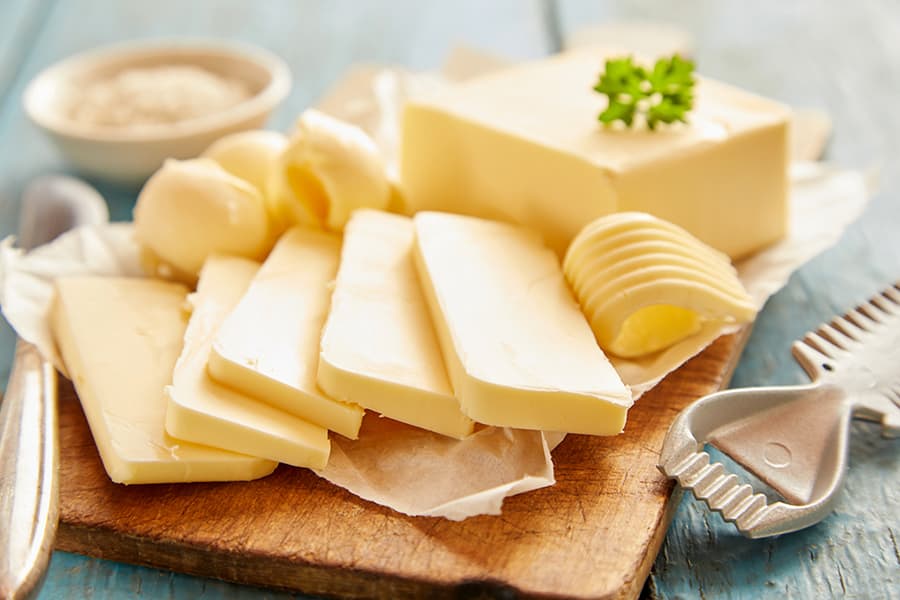 Butter is another staple in most kitchens – and just like milk, there are many dairy-free options in most supermarkets today.

If you want to use butter for sautéeing food, spreading on toast or to add to recipes, then a simple swap to dairy-free margarine works best. There are dozens of margarines available in shops, and many of the most popular brands don’t contain any dairy: Flora Original, for example, is vegan. Dairy food brand Upfield – the owner of Flora, Bertolli, Elmlea and ProActive – has also announced plans to make all its brands 100% vegan over the next few years, meaning there’ll soon be even more choice.

If you need to use a large quantity of butter (for example, if you’re making a cake or pastry), you’re better off using a plant-based butter rather than a margarine – one that’s solid at room temperature. Most health food shops stock several different varieties of vegan butter blocks, but one of the best is the Naturli butter block, which is available at Sainsbury’s. 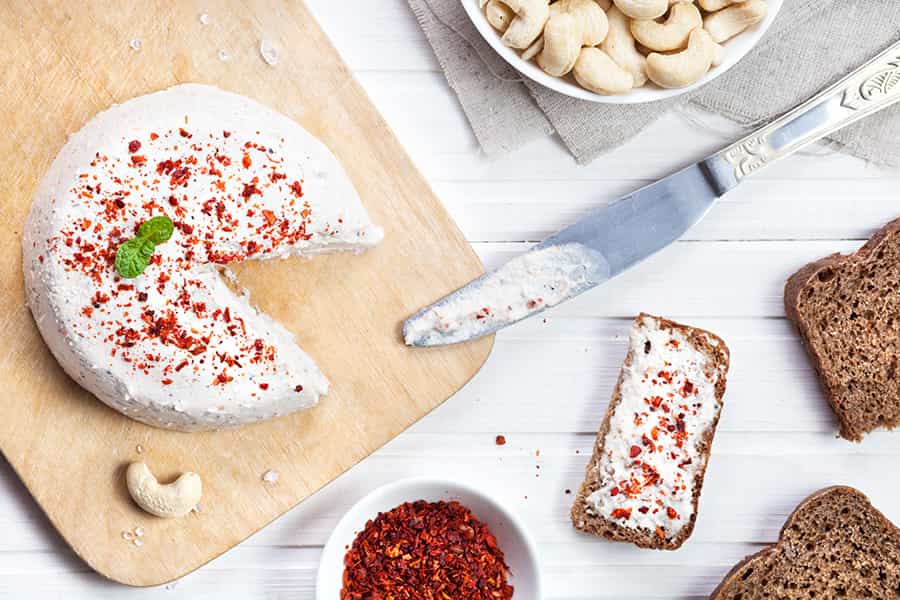 If you’re making a savoury recipe that calls for soft cheese like ricotta, goat’s cheese or cream cheese, then vegan cream cheese will work well. To find out more about the different brands that are available in most supermarkets, check out Good Housekeeping’s guide to the best dairy-free cream cheese.

Or, for a healthier, unprocessed alternative, why not consider making your own dairy-free nut cheese? This vegan cream cheese recipe by The Spruce Eats uses almonds and nutritional yeast to create a smooth and creamy spread. Nutritional yeast gives it a delicious nutty, cheesy flavour – and because it’s packed with protein, B vitamins (including B12) and minerals like zinc, selenium, and manganese, it’s a much healthier alternative. You can buy nutritional yeast from Holland & Barrett.

If you’re making a creamy dessert, like chocolate mousse or cheesecake, silken tofu is by far the best dairy-free sub. Making indulgent desserts out of tofu might seem strange, but tofu is a great replacement for common dessert ingredients like butter, cream, cream cheese and even eggs, and works well at bringing all the other flavours together.

Tofu is also high in protein, rich in minerals, and an anti-inflammatory food, so it’s also a much healthier alternative – and because it’s low in fat and contains no cholesterol, it makes great low-calorie desserts. If you still feel unsure about using tofu in sweet treats, just check out these delicious tofu-based desserts from The Spruce Eats!

If a recipe calls for blue cheese, camembert, brie or herb cheese, then check out Honestly Tasty, which is easily the best new vegan cheese brand available in the UK. Their dairy-free alternatives of gorgonzola, camembert, brie, and Boursin may make you reassess everything you think you know about vegan cheese – and because they melt beautifully, they work really well in cooking, too!

If you’re interested in making your own dairy-free cheeses, check out the video below. 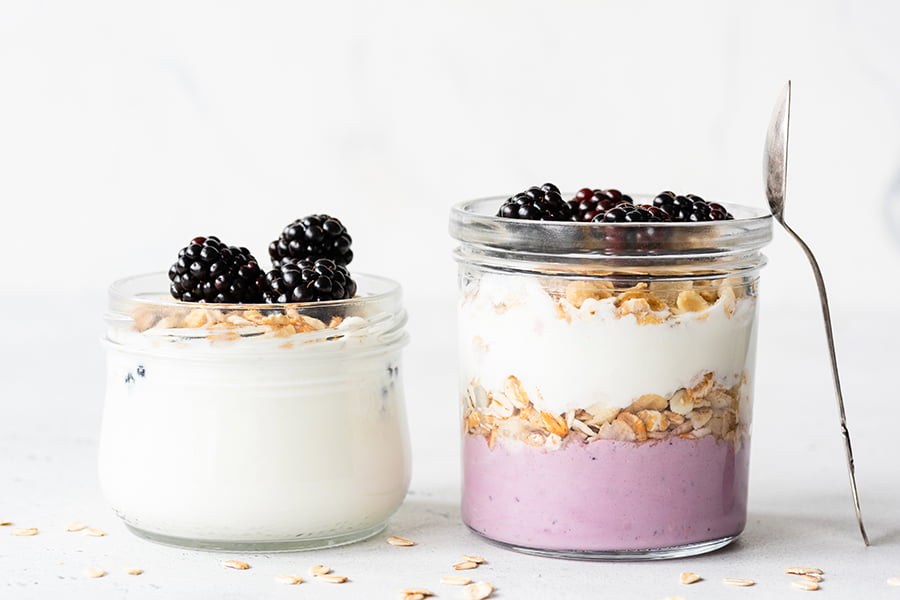 Yoghurt is often used in baking to help baked goods rise, to keep them moist, and to give a subtle tang. Luckily, there are lots of dairy-free yoghurts available in most supermarkets, and most are made from either coconut, cashews, soya, or almonds.

If you’re using yoghurt in a smoothie or fruit shake, then pretty much any of the dairy-free alternatives will work. It’s worth just trying a few available in your local supermarket and seeing which you like best. To find out more about some of the different types of dairy-free yoghurt, check out this guide by Vegan Food & Living.

If a recipe calls for Greek yoghurt or full-fat yoghurt, you might have to be a bit pickier. Creamy yoghurts have higher fat contents, and it’s this fat that adds moisture and richness. Cashew-based yoghurts work well for savoury dishes that call for full-fat or Greek yoghurt, and coconut yoghurt is best if you’re making a sweet dish – or a savoury dish that can be completed with a subtle coconut flavour.

Or why not have a go at making your own dairy-free Greek yoghurt? This recipe by The Minimalist Baker uses only two main ingredients. You can also have a watch of the video below for more in-depth guidance. 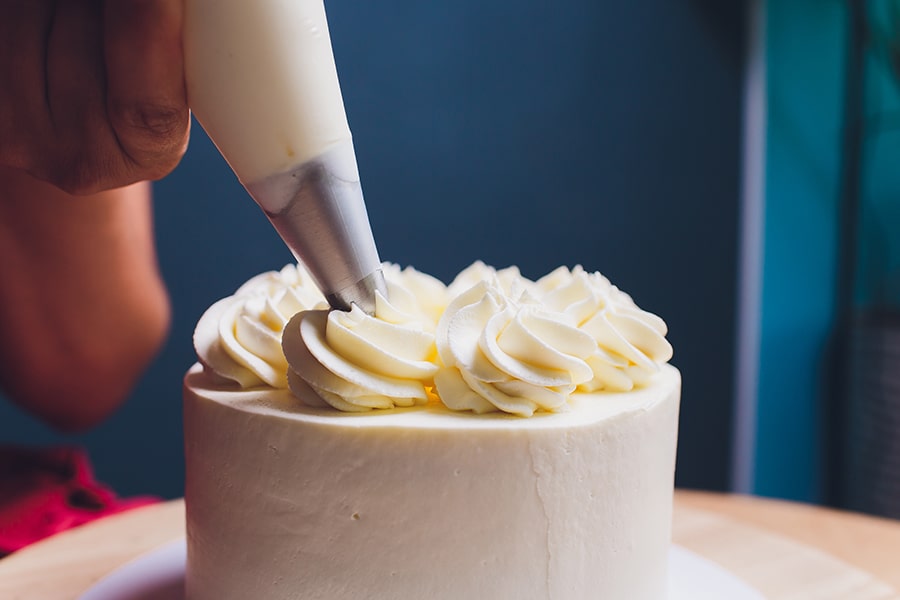 Cream is an essential ingredient in lots of different recipes, giving soups, sauces, potato and pasta dishes a silky smooth texture. The good news here is that you can easily swap it for some of the dairy-free creams on the market and you probably won’t be able to tell the difference.

Both Oatly and Alpro do great vegan creams, and most supermarkets usually stock one or the other, if not both. Oatly’s Creamy Oat is an excellent sub for single cream, and if a recipe needs whipped cream, they even do a whippable cream! Alpro’s single cream is made from soya, and has a subtle, creamy taste, as well as 42% less fat than dairy single cream.

If you need something really thick, creamy and indulgent, you might want to use coconut cream. Much thicker than coconut milk, coconut cream works well in frostings for baked goods, as well as in fillings. You can buy coconut cream from shops, but you can also make your own by putting a can of coconut milk in the fridge, and then when it’s chilled, skimming off the thick part at the top.

If you’re looking for a good sour cream or creme fraiche replacement, then Oatly’s Oat Fraiche is a quick and easy sub. It works well in both hot and cold recipes, and is just as good served on the side of a sweet cake as it is with spicy Mexican food!

Whether you’re lactose-intolerant, watching your weight, or cutting back on dairy for health, environmental or ethical reasons, we hope this article shows that you don’t need dairy to cook up a storm.

From making quick swaps over to dairy-free alternatives to making your own plant milk and nut cheese from scratch, dairy-free cooking can be just as indulgent and tasty – and often it’s a lot healthier and more creative too! Plus, knowing that you’re being that little bit kinder to the environment might make your creations taste even better…

Are you trying to cut back on dairy – or do you already omit it from your diet? Or maybe you have your own favourite dairy-free substitutes that you’d like to recommend to our readers? We’d love to hear about your dairy-free cooking experiences! Leave us a comment below or join the conversation on the Rest Less community.

Get NHS prescriptions delivered for free with LloydsDirect

LloydsDirect works with your NHS GP to take care of your repeat prescriptions and deliver them to you, for free.

Get your free over 50s lifestyle assessment

As we get older, our health can take on a new level of importance. Maintaining our mental and physical wellbeing can help us to lead a longer and happier life.

We’ve partnered with LiveSmart to bring you comprehensive health checks that can help you safeguard your health. Created by doctors, these easy-to-use tests can tell you why you have low energy, find it difficult to lose weight, what foods are right for you, and much more.