10 must-see Victorian sites across the UK

Ascending to the throne at just 18 years old, Queen Victoria reigned over Britain for 64 years – from 1837 until her death in 1901. Set against the backdrop of Revolutionary and Napoleonic victories, the Victorian era was a period of significant industrial, scientific, political, and military change.

It marked Britain’s transformation from a rural, agricultural country into the first global industrial power; though the country suffered huge social costs including child labour, pollution, and poverty as a result.

Today, one of the best ways to connect with our Victorian past is to visit the various historic sites that remain dotted across the UK.

Full of stories and precious artefacts, we’ve put together a list of 10-must see Victorian sites that are unrivalled in their ability to bring this rich period of history to life. From royal residences to poor workhouses, hopefully they’ll help you explore all aspects of Victorian life. 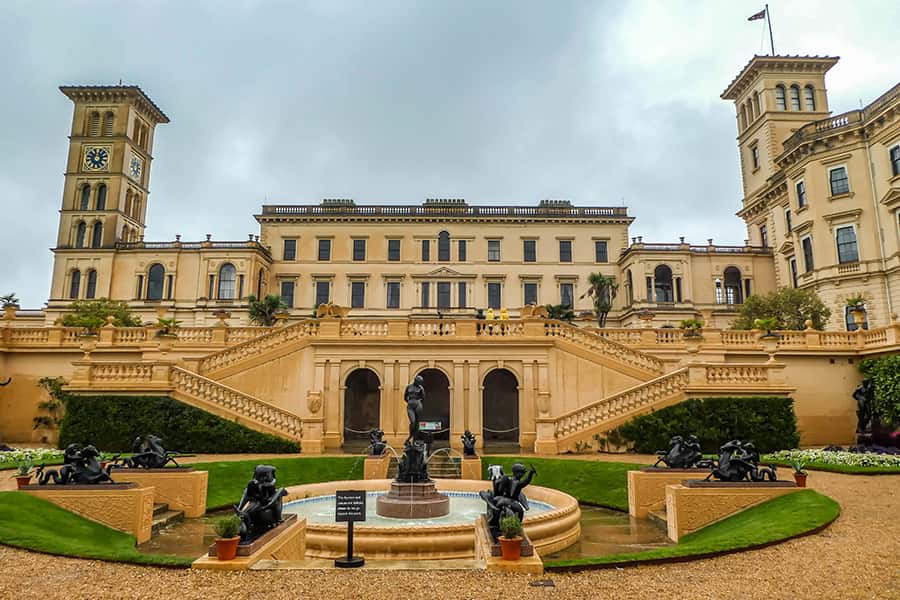 Osborne House was commissioned by Queen Victoria and Prince Albert in 1845. After the Queen described it as ‘impossible to imagine a prettier spot’, Osborne House was arguably the royal couple’s most cherished residence and is a true glimpse of their passions, taste, and style.

Situated on the Isle of Wight next to the sea, the estate gave the royals and their children an escape from court life. Queen Victoria used the site to entertain, and sought comfort in staying there after Albert’s death in 1861.

Osborne House was built in the Italianate style after Prince Albert said the views overlooking the Solent strait reminded him of the Bay of Naples. The Queen requested that it be kept as it was at the time of her husband’s death.

The Crystal Palace was a cast iron and plate glass building that was originally constructed in Hyde Park, London. Its purpose was to house the Great Exhibition of 1851 – where more than 14,000 exhibitors from around the world gathered to display fine examples of technological development from the Industrial Revolution.

The Crystal Palace was one of the great wonders of London – if not the world. It stood three times the size of St Paul’s Cathedral and represented the modern architecture and industry that was developing at the time. The Palace was extremely popular with Queen Victoria and Prince Albert, who had initially opened it and made many return visits.

After the exhibition, the Crystal Palace was relocated to Penge Place in South London, where it stood until a fire destroyed it in November 1936. Today, the nearby residential area and well-known football club – Crystal Palace – are named after the landmark.

While the Palace itself no longer stands, there’s a Great Exhibition Virtual Tour, which uses modern technology to recreate The Great Exhibition. Viewers can marvel at the size of the building and study fine details of the event. The tour also tells fascinating stories of The Great Exhibition – including about the lady who walked all the way from Cornwall to attend!

3. The Workhouse and Infirmary, Nottinghamshire 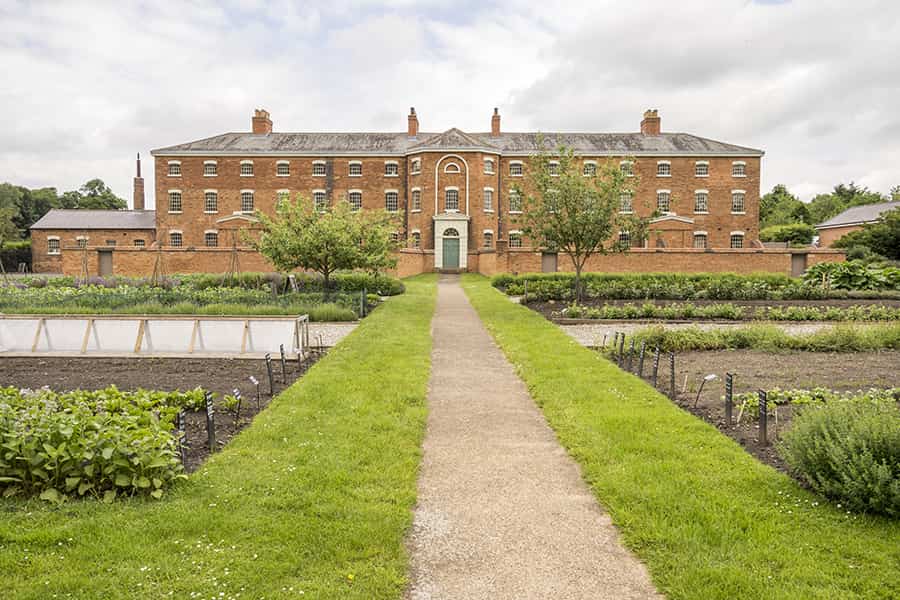 Built in 1824, The Workhouse is the best preserved example of the hundreds of workhouses that were constructed across the country during the Victorian era. The work system implemented in the workhouses was developed by Reverend John T. Becher and George Nicholls – whose ideas shaped how the poor were treated during the 19th century.

Instead of each parish supporting deprived individuals, Becher’s idea was for local parishes to combine funds and build workhouses to house and employ the poor. Based on segregation and hardship, workhouses were intended to stand as a ‘deterrent’ to ensure that only the truly desperate would submit themselves to living under such harsh conditions.

At The Workhouse and Infirmary today, visitors can grasp an idea of what living inside the workhouse would have been like. The stories of those who lived and worked there during the 1840s encourage us to reflect on how society has approached poverty throughout history.

Visit The Workhouse and Infirmary
Find accommodation on Booking.com 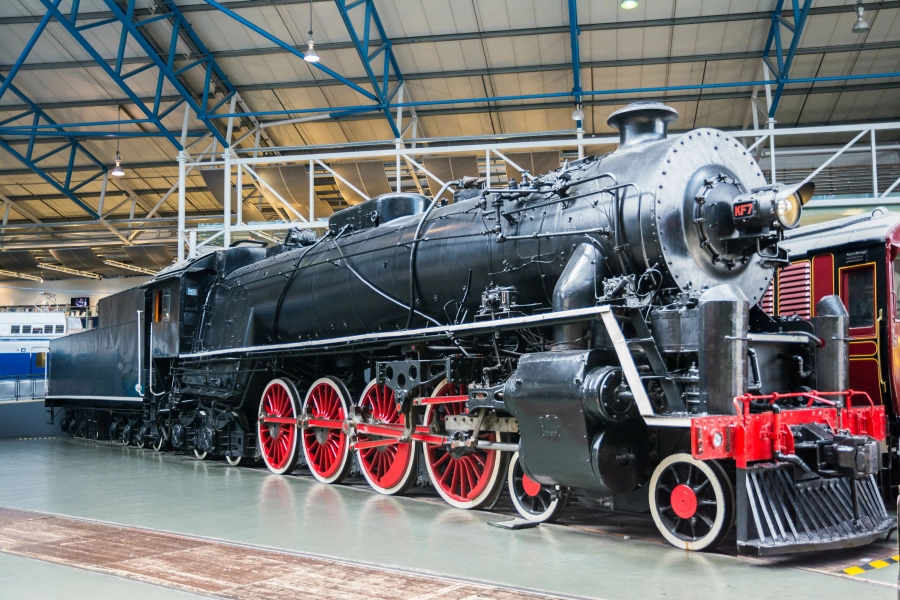 At the heart of the Industrial Revolution was the development and application of steam technology. Growing rapidly during Victorian times, Britain’s railway network introduced new opportunities for travel, holidays, and the transport of goods. These changes generated huge developments in business, the growth of towns and cities, and the spread of political, social, and economic ideas across the country.

The National Railway Museum is the UK’s largest railway museum. It’s home to over a million objects which tell the story of Britain’s railway transport history, exploring how it transformed the nation.

Key highlights include a miniature railway, train simulator rides, and demonstrations which explore the different types of energy used throughout history to fuel railways. There’s also a new audio trail which is used to transport visitors to different historic locations such as the Great Hall during its time as a busy engine shed. 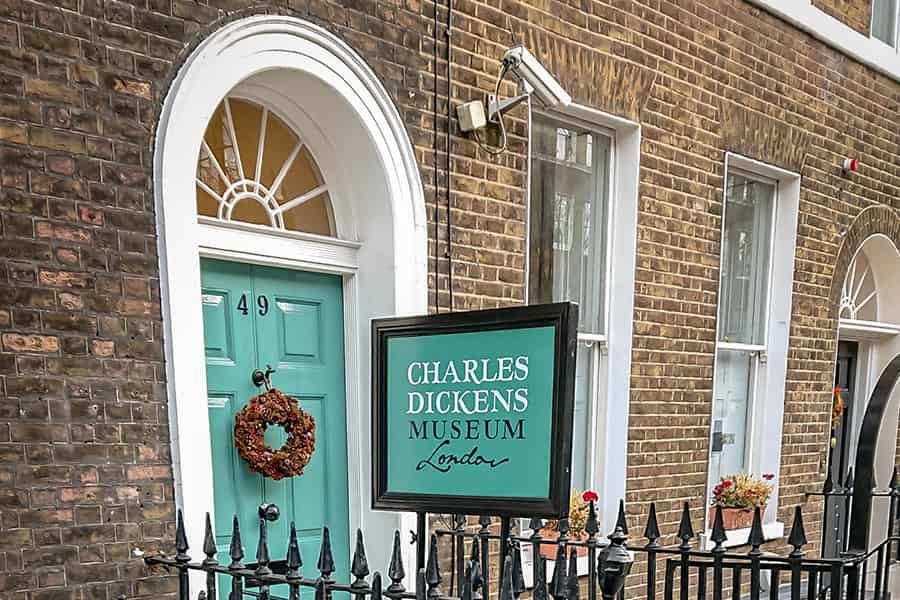 Charles Dickens was a famous English writer and social critic. Widely regarded as the greatest novelist of the Victorian era, Dickens created some of the most memorable characters in English literature that are still loved today. These include the likes of Ebenezer Scrooge and Tiny Tim (A Christmas Carol), Oliver Twist and Bill Sikes (Oliver Twist), and Pip and Miss Havisham (Great Expectations).

The Charles Dickens Museum is found at 48, Doughty Street, which was the Dickens’ family home. The building remains preserved as it would have looked when the Dickens family lived there, and features a collection of around 100,000 objects that belonged to the author.

From letters and furniture, to clothes and illustrations, the museum not only documents Charles Dickens’ life, but also reflects middle-class life in Victorian London. 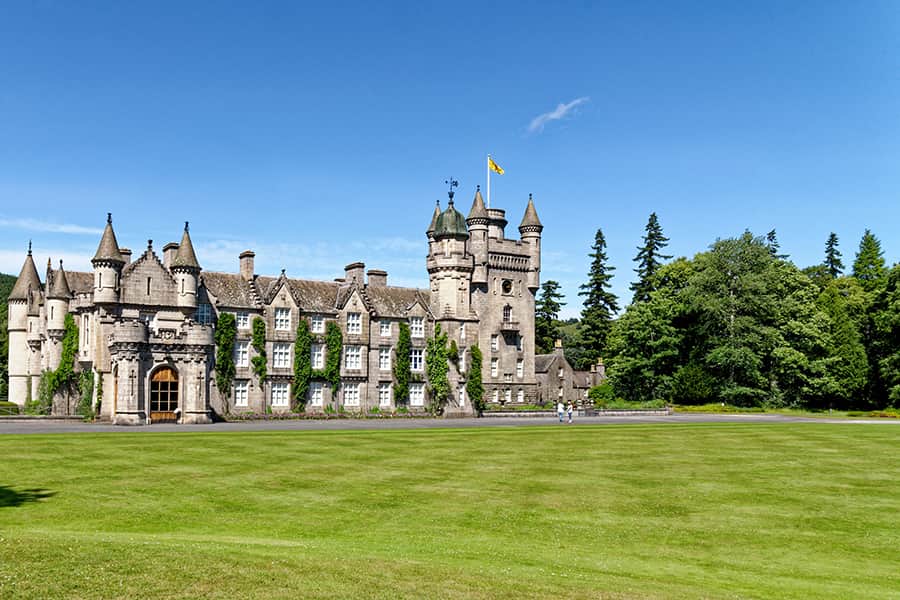 Balmoral Castle was built specifically as a holiday home for Queen Victoria and Prince Albert and has remained a Royal residence since 1852. The site was originally a hunting lodge, built in 1390 by King Robert II of Scotland, but Victoria and Albert decided it was too small for them.

Situated within the beautiful Cairngorms National Park in Aberdeenshire, Victoria and Albert chose the area after being told that the weather was much better than other areas of Scotland. From her diary entries, we know that Queen Victoria spent much of her time at Balmoral enjoying long walks, painting and sketching, and taking part in hunting events.

As a result of their visits to Balmoral, Victoria and Albert were responsible for turning Scotland and its castles into a popular tourist attraction. Following in their footsteps many people wanted to visit Scotland and have their holidays there.

Today, visitors can enjoy guided tours of Balmoral Castle, though you’ll need to book in advance. 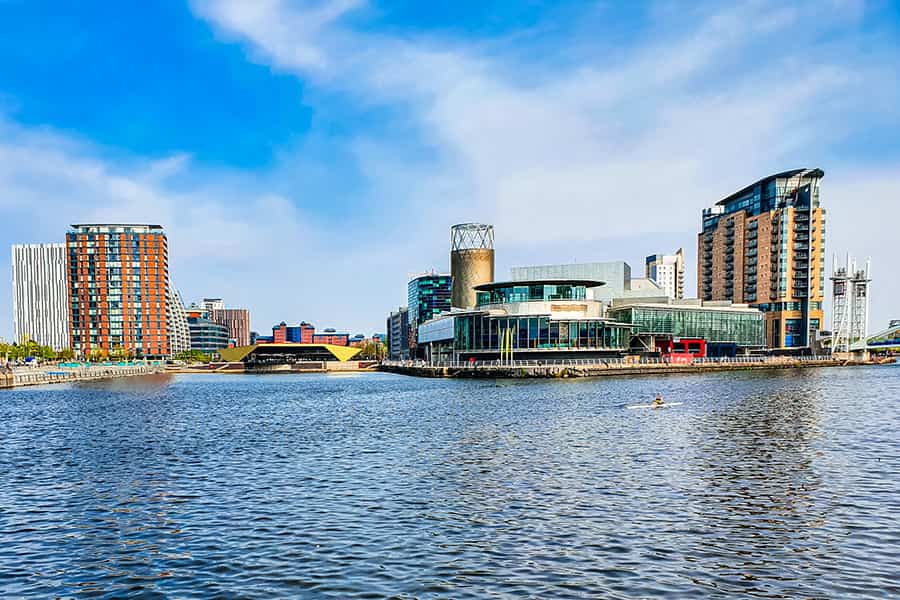 If you fancy taking a step back in time to experience a bit of Victorian life yourself, then Salford Museum and Art Gallery is definitely worth a visit. Here you’ll find a wonderful re-creation of a typical northern street as it would have been during Victorian times.

The street is set at the turn of the 20th century – at tea-time on a winter’s evening after the street gas lamps have just been lit. Visitors can have fun peering inside the various houses and shops dotted along the street. And in the background you’ll hear sounds typical of the era – including horse-drawn carriages, children playing, and ‘knocker-uppers’ (these were people whose job it was to wake sleeping people so that they could get to work on time!).

Salford Museum also hosts various galleries which explore social history to enjoy while you’re there. You can read more about what to expect from Lark Hill Place, including what Victorian shops are featured on the street, on the Salford Museum website. 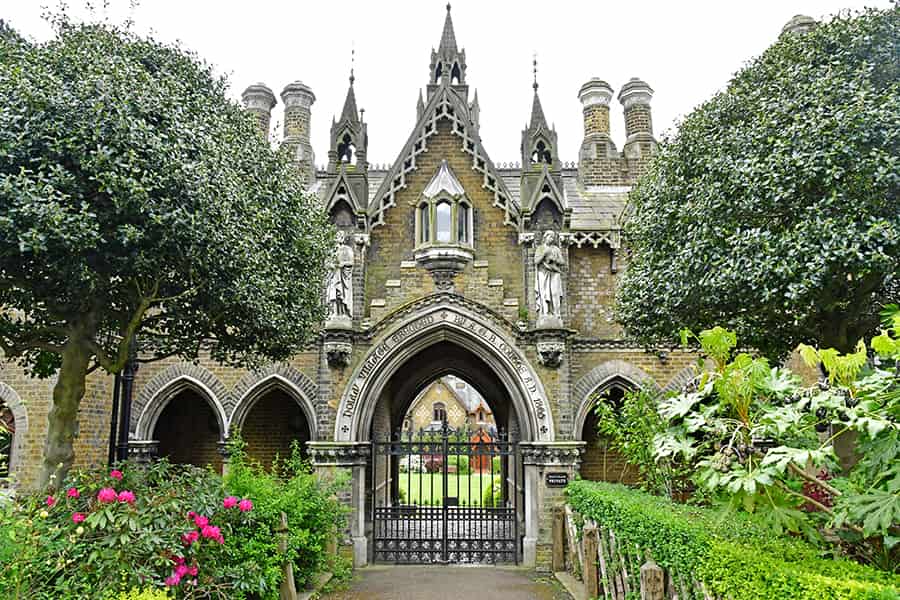 During the early decades of the 19th century, London had a growing population and high mortality rate. Lacking adequate burial space, the capital faced a serious problem: there wasn’t enough space for the dead.

The reality was pretty gruesome. Graveyards were crammed wherever there was space – between shops, houses, and taverns – and bodies were wrapped in cheap material and buried in graves just a few feet deep. In response, Parliament passed a statute that instructed new private cemeteries to be built in the countryside surrounding London. Highgate Cemetery was one of these, built in 1839.

Highgate became one of London’s most fashionable cemeteries, and is the resting place of around 170,000 people in 53,000 graves. Not many places capture the atmosphere of a Victorian cemetery better than Highgate. 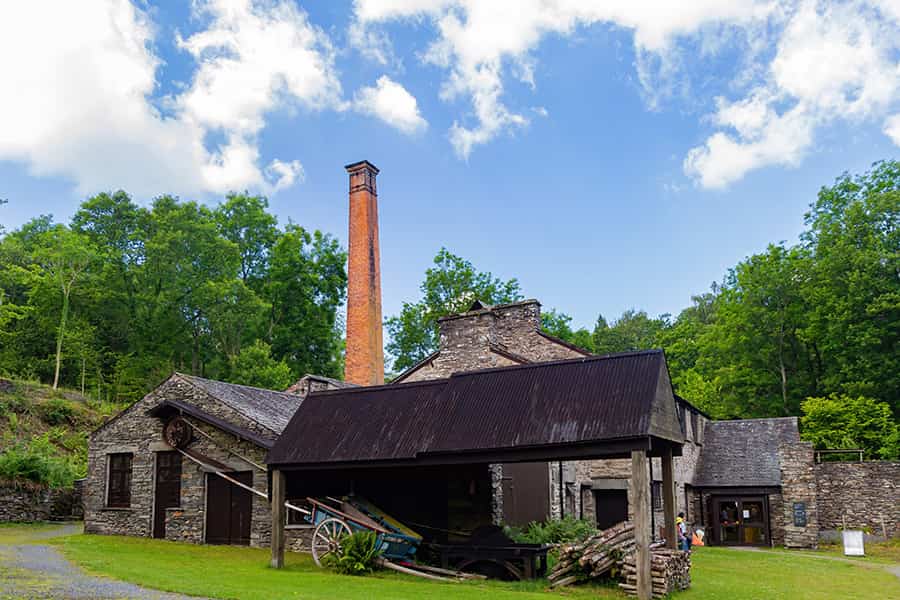 Stowed away on the shores of Lake Windermere in Cumbria is Stott Park Bobbin Mill. The Mill produced millions of wooden bobbins that were vital for the Lancashire spinning and weaving industries. Stott Mill was built in 1835 and is the only working mill left in the Lake District today.

Although small compared to other mills, around 250 men and boys worked at Stott Mill – often in bleak conditions – to produce a quarter of a million bobbins a week.

Today, visitors can enjoy the story of the bobbin mill industry brought to life through various exhibitions and tours. There’s also the opportunity for guests to watch the entire journey from tree to bobbin on the original belt driven machinery. 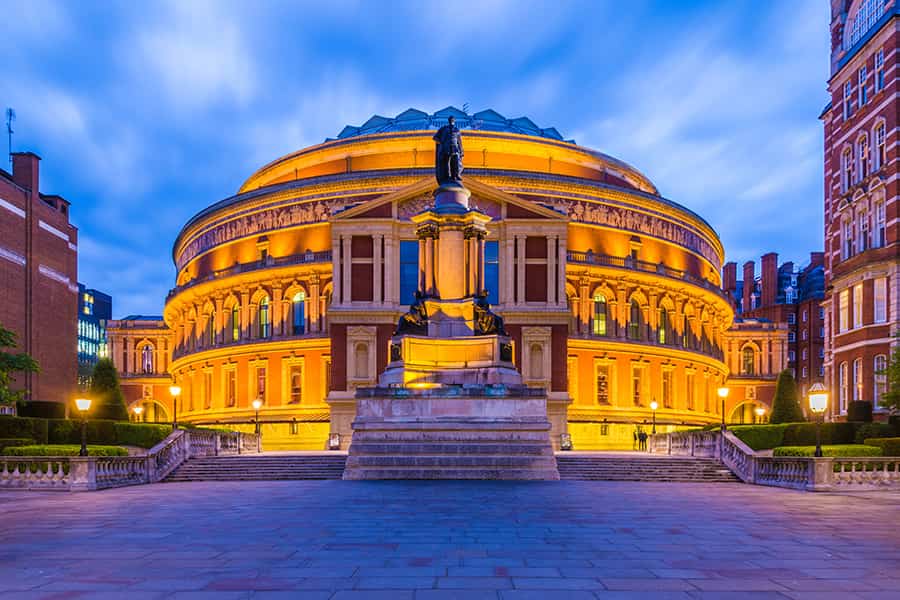 Originally named the Central Hall, construction began under the direction of Prince Albert using the profits of the Great Exhibition of 1851, which took place just opposite the site, in Hyde Park.

Queen Victoria decided to rename the building the ‘Royal Albert Hall of Arts and Sciences’. The Prince of Wales declared it open on behalf of his mother on 29 March 1871. Though present, Queen Victoria was too emotional to speak since the building reminded her of her late husband, Prince Albert, who had died around a decade earlier in 1861. Sadly, Albert didn’t live to see that the Hall had been named in his honour.

Tours are available of the Royal Albert Hall, where you can explore the royal areas, experience the breathtaking auditorium, and marvel at the famous stage that’s been host to famous figures like Winston Churchill, and Albert Einstein.

The Victorian era marked Britain’s transformation from a rural, agricultural country, into an urban industrial superpower. Under Queen Victoria, though scientific, economic, and industrial advancement was huge, the social cost was just as big – and the contrast between rich and poor even greater.

By engaging with these historic sites we can grasp a deeper understanding of what life was like for people from all walks of life in Victorian Britain.

What is your favourite period of history and why? What do you love most about visiting historic sites? We’d love to hear from you. Join the conversation on the history section of the Rest Less community forum, or leave a comment below.