In recent years, scientists have claimed that ‘60 is the new 40’, mostly in response to our ageing population and research into changing attitudes on what it means to be ‘old’.

In 2000, the average life expectancy in the UK was 77 but in 2020, this rose to 81. A survey carried out by Treasure Trails also found that over half of the over 60s surveyed believed that old age now started at 76, and nearly a third believed it started at 80. Plus, 46% claim to feel fitter than their parents of the same age and 1 in 10 said that they had more energy than their children.

With people living longer, healthier lives than ever before, there’s been a natural shift in the milestones and lifestyles traditionally associated with different age brackets. People are getting married later, having children later, working longer, ‘unretiring’, and continuing to explore and pursue new challenges and adventures well into their 60s, 70s, and beyond.

In an interview with The Mirror, Doctor Sergei Scherbov who has led studies into ageing, said, “Age can be measured as time already lived or it can be adjusted taking into account time left to live. What we think of as old has changed over time, and it will need to continue changing in the future as people live longer, healthier lives.

You’re only as old as you feel

But many would argue that we shouldn’t wait for scientists or society to redefine how we should behave or perceive each other, based on age or how long we have left to live. Instead, each and every one of us could live life according to how we feel and the outlook we choose to adopt.

Baseball star, Satchel Paige, once said, “How old would you be if you didn’t know how old you are?” – and research suggests that Paige could have the right idea.

Not only does the average person over 60 say that they feel 12 years and five months younger than their actual age, but a recent study also found that people who perceived themselves as older, were biologically older – highlighting a strong correlation between the mind and body.

While it can be difficult to disregard numbers and societal expectations about age, if we do – and we start living a life that’s centered around our own individual beliefs, values, interests, and passions – the possibilities for who we can be and what we can achieve become limitless.

Letting go of the life we think we should lead based on our chronological age means not trying to chase the fountain of youth and live like a 40-year-old at 60 because ‘60 is the new 40’ – and not conforming to outdated views that you should slow down once you reach the State Pension age, if that’s not the right decision for you.

Rather, it’s about embracing life at every stage in the way that you want to, and in a way that leaves you feeling fulfilled and satisfied. It’s also about taking more time to celebrate the growth, development, and experience that comes with each year of being alive, and using it to enjoy life in new ways. 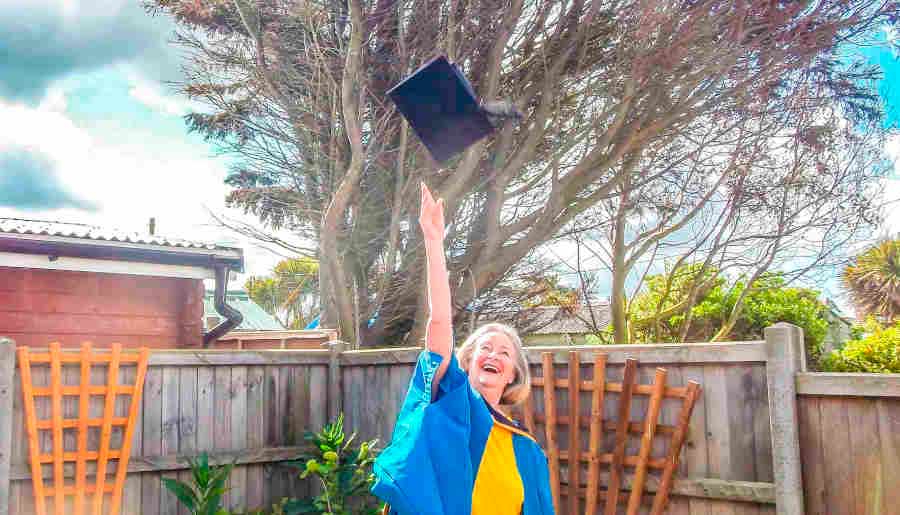 Since Rest Less first launched in 2018, we are incredibly proud to have spoken to many members who are prime examples of what it means to step outside of your comfort zone and grab opportunities by the wings, regardless of age.

We also spoke to 56-year-old Mike Hull last year as he prepared to row solo across the Atlantic, and to 60-year-old Irini Tzortzoglou who won Masterchef in 2016.

Plus, when it comes to the world of work, many people in their 50s and 60s are swapping retirement for career changes, part-time roles, volunteering opportunities, and entrepreneurship. Some people have also retired only to discover that they miss the social and learning opportunities that come with work.

One such example is Dee Flower, who began working with young people with autism and learning disabilities at age 68, eight months after retiring.

Mark Pearson, 58, is also taking his first steps to becoming a dog trainer, after a career as an HGV driver, Kim Wright left her high-powered management job to drive a patient transport ambulance in her 50s, and Ian Palmer opened a whisky distillery at 57.

And it’s not just people in their 50s and 60s who’re chasing new adventures. Looking around, there are plenty of examples out there of people in their 90s and even 100s who’re continuing to make the most of what life has to offer…

Jack Reynolds got his first tattoo on his 104th birthday and broke a world record as a result. Fauja Singh (or ‘Turbaned Tornado’) ran several marathons (one at 104!) after taking up long-distance running at 81. And in 2020, Yu Te-Hsin became the oldest person to tandem paraglide at 105 years old.

In her recent article on ages, journalist and author Gillian Harvey said, “Let’s face it, nobody is going to claim that 40 is the new 20, or that 20 is the new foetus.” And she’s right… if 60 really was the new 40, where would that leave everyone who is actually in their 40s, 50s, or younger?

But, the claim ‘60 is the new 40’ is really just a way to describe the way that people are living longer, healthier lives, and feeling younger at 60 than their parents and grandparents – which is something to celebrate.

And as much as this is to do with advances in medical treatment, improved sanitation, and an an increased knowledge and understanding of health and nutrition – how we spend our time can also have a significant impact on how young we feel.

For example, research shows that 20% of people surveyed over 60 felt that playing with their grandchildren kept them young, while 11% enjoy gaming, and half enjoy playing sport.

Ageing is a blessing and here at Rest Less we believe that 60 is the new 60! And that rather than comparing 60-year-olds to 40-year-olds, we should spend more time celebrating the positive aspects of 60, of which there are many.

As a society, we seem to shy away from acknowledging a person’s real age – telling children that they look or act older for their age and adults that they look and act younger. But, what if we started putting age aside and accepting people for what they are, living in the here and now, and challenging the limits on what society expects of us at every age milestone?

Many current beliefs around ageing are based on information that’s no longer valid and it’s up to all of us to continue breaking the mould and paving the way for others who are yet to see the beauty that ageing can bring.

As Cindy Joseph once said, “Ageing is just another word for living.” So what will your next adventure be?

Do you believe that 60 is the new 40? Do you feel younger than your age? We’d love to hear from you. Join the conversation on the Rest Less community forum or leave a comment below.